Straight out of the Golden Gate City, GARYSHAWN has been chipping away at touching million’s all by himself. Having only recently started to drop music less than two years ago, GARYSHAWN has yet to release one song with a feature, crafting his own sound to himself and curating some of the catchiest melodies for fans to sing all day. Prior to the release of “Endless Love”, GARYSHAWN began a YouTube channel with all sorts of funny pranks and moments in his life. Over time, it's become clear GARYSHAWN can multitask, making long lasting relatable music all the while creating content entirely separate to his music over the past two years.

Back in September, GARYSHAWN dropped his first album “Decisions”, with only 8 tracks, which all did really well and fit the common theme, giving his audience a sense of flavor. “Boo Thang” was the breakthrough track, bringing in just under a million streams on Spotify alone. GARYSHAWN opens over a vocal loop saying he “don't even smoke weed” yet he “feels high when” he’s “next to you” before revealing that she “used to be” his girl. Reminiscing on how he used to feel, trying to explain that if she’s his “girl imma (GARYSHAWN) show you off to the whole world”.

Placing “Endless Love” as track No.8, he must’ve known it had much more potential after being the first track on GARYSHWAN’s discography. “Endless Love” has since gained just south of three million Spotify streams and truthfully deserves much more. GARYSHAWN takes off asking “what it do, sauce up on you to” exposing the hook early on and making it easy for new listeners to sing along when it comes back around. GARYSHAWN goes on explaining how she “said she loves me but” he “know she got a lotta bodies” and he still “love” her “too”.

The whole album “Decisions” more than anything shows the potential of GARYSHAWN in this industry. Establishing a common theme, the album gives fans a sort of expectation that's almost addicting. Not only providing the lyrics, GARYSHAWN operates as a team, alone, making all of his own beats and then placing the icing on the cake with his melodies.

Go check out @garyshawwn on Instagram to put your friends on and stream “Decisions” on all platforms. Follow us @engmtcent for more content & articles every Tuesday & Saturday! 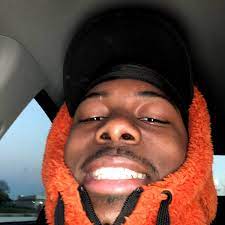