Behind The "Dropout Klub".

Wichita hasn’t necessarily been known for it’s musical talent, but Damien Styles is ready to change that. Just last December, Damien released his second album “For All The Times I Fell On My Face” under 10kprojects with Dropout Klub LLC, the movement for “the kids they can’t control”. Damien’s authenticity is nothing short of inspiring, as he expresses himself so truthfully that today’s phony society would label him as “insane”. Damien Styles takes on a twist of new-age punk rock sound that’s nearly addictive to the outliers descending from all walks of life. The interesting turning lyrics are bound to make you feel washed with emotion, pushing into songs you’ll scream out loud and push a smile to.

We sat down with Damien to hear a bit more about himself in his own words; We hope you enjoy it as much as we did!

I’ve been making music since I was 4 or 5 years old. My pops was a musician so I grew up around it. What I really fell in love with about music was the escapism aspect of it. Being able to create new realities and express myself in new ways. S***s so sick. That’s still why I love it. Well, one of many reasons.

F*** no. My parents tried putting me in sports as a young kid and I would literally just stand there in the middle of the field with my arms crossed. I just wanted to be creative. You know? Like, as a kid I wrote short stories a lot too and that was another passion of mine. One that I’ll probably tap back into at some point honestly. I also really f*** with soccer. And skating/bmx but I’m not too good at those. All that s*** is just hobbies tho. Music is oxygen for me. Creating in general is like that. I wouldn’t be here without it.

The first song I ever recorded, I believe, was called In My Zone. And it was literally just about getting into my zone and being a beast at what I do. I was influenced by my pops a lot at that point who came up rapping in the 90s so it was some super braggy rap s***. I’ll probably leak all my childhood music one day if people don’t find it first. It’s out there on the internet. But I went by a stage-name at that point and I’m not gonna reveal it yet.

Man bro, first and foremost; no corny s***… Jesus. He was a perfect example of someone who would stand on everything he believed. Truly selfless. So much so that he would sacrifice his own life for the sake of everyone else. That s*** means so much to me. I strive to be like Jesus more and more every day and constantly stay in his word.

But beyond that, I’m really inspired by creatives like Kanye and Tyler The Creator who follow their creativity wherever it takes them. In and outside of music. They don’t believe in limits, and neither do I.

I’m also super inspired by Gerard Way for similar reasons. He saved my life on multiple occasions. If I meet him one day, or God willing WORK WITH HIM, I’m for sure gonna cry. And I’m not no fanboy. But that’s different. He’s so dope man. I just wanna save as many lives as I can, the same way he saved mine.

And lastly; sorry for the long a** answer, but I’m inspired by fictional characters a lot. I f*** with Huckleberry Finn and Peter Pan and Sora from Kingdom Hearts and Santiago from The Alchemist, and pretty much any character that embodies freedom and staying true to their heart. I f*** with that. That’s how I am. And I always wanna be like that.

Yeah bro I’ve always used music as therapy. I’m blessed to have such an outlet.  For real. I know a lot of kids don’t have one and that’s why I always release the music that helped ME. I say the s*** in my songs that I wish someone would tell me in real life. And then it helps all these f****** kids who feel how I feel. It’s a beautiful thing that I’m able to make a difference and help people just by healing myself. That’s why there’s such a deep connection with me and my fans. Dropout Klub isn’t just a regular fanbase. It’s a family. If the world doesn’t understand us, it’s f*** the world. Cause I get it. And they get it. And we come from similar places in one way or another. And we’ll make it out of the dark together. And prosper together. I believe that. They’re just as crucial to this shit as I am.

So, when I made Antihero… f***. I was in such a dark place. I was so lost bro. I didn’t know who I was fully, I was experiencing love and all its complications for the first time. I was alone in LA away from my family. S*** was a lot to handle at once. I hadn’t found God yet. So that being said, I didn’t have the confidence to be the hero figure I was born to be. But I knew I wasn’t the villain. I tried to play that role before and my heart is too big, so I was like f*** it bro I’ll be the Antihero. All my favorite characters are antiheros anyways I feel like.

But “For All The Times I Fell On My Face” was me finally accepting the hero role. It’s a story of victory. It’s my story of overcoming all the obstacles in my life, including the time period I made Antihero. I touch on subjects from growing up in a household with constant domestic violence, to struggles at school and with authority, homelessness, being in the streets and selling drugs and s***, heartbreak, everything bro. This project really was a huge energy release. I healed so much from making these songs. And it’s been dope to see it help other people with their trauma as well. It would really take a whole interview in itself for me to break down that whole project. If you’re reading this, you should really just go listen to it yourself. It’s transparent as f***. You’ll know me a lot better after bumping it.

If you were able to see my message requests on IG, you wouldn’t even be asking this question. Seriously it blows my mind every day seeing how many different people my music is helping overcome depression, anxiety, addiction, self esteem issues, all types of s***. That’s what makes me sure. Seeing the impact my message has on other people. Seeing fans get Dropout Klub tattoos. That’s for life bro. It helped them that much. And I get that. I have a My Chemical Romance tattoo. I get it. And it’s so insane that I can be that for other people man. It’s really crazy. I wish I could respond to all of them and have conversations with every individual person. I try my best to hit back as many people as I can though. I f****** love these kids.

Dude that song is for everyone who needs a confidence boost sometimes. It’s for the girl who thinks she’s fat because she doesn’t fit society’s beauty standards. It’s for the kid who feels like a weirdo because he doesn’t pull girls. It’s for so many different people. Just showing them that they are beautiful exactly as they are. They can sing that shit and feel like a f****** Bad Bitch. Period. Male or female, straight or gay it doesn’t f****** matter.

And to answer your second question, I was wearing girl shirts in 5th grade bro. Dying my hair all types of crazy colors, wearing tight ass jeans, all that. Way before this shit was cool. Motherfuckers thought I was weird as hell. Now everybody’s on that shit. But that’s dope I guess.

I would tell them to listen to “For All The Times I Fell On My Face”. It breaks down exactly what I want to say.

Basically the best advice I could give them is to embrace failure. Lean into that s*** and learn from every f*** up. That’s what it takes. Losing over and over and over and figuring out what doesn’t work until you finally find what does.

And understand that you’re going to have to sacrifice a lot. Time, money, relationships, everything. If you’re serious about this s***, you’re not gonna let anything stop you.

And that brings me to my last point; if you have a Plan B, don’t even try. That’s how I feel at least. You’re making it okay to not succeed in what you want to do in the long run. So you probably won’t. You won’t work as hard to get there. Because why would you? You have a backup plan. When you go all in, and you literally have to make this s*** work, you will. I really believe that.

So the LLC is my record label, but Dropout Klub itself is so much more than that. It’s essentially a name for my “fanbase”. I f****** hate that word. It’s a name for my FAMILY. The kids who have nowhere else where they fit in KNOW that they fit in here. They’re a part of this s***. Dropout Klub is a positive, safe place for people who may not have that elsewhere. We’re encouraging each other to Dropout of everything that’s holding us back from being our best version. Whether that’s toxic friends, addictions, self limiting beliefs, whatever. We grow together. And I make the soundtrack to that s***.

“We’re the kids they can’t control” doesn’t mean we’re out of control and just being wild belligerent fucks. It means that we can’t be put down or told what we CAN’T do. We can’t be limited. No one can control the outcome of our lives. But us. And God.

Expect some crazy new singles and videos, a lot of dope content on social media, and some dope a** shows. I hope to be on tour soon. We’re in the process of talking to booking agents and trying to find the right fit. Once we do, it’s over. I can’t wait to go meet Dropout Klub in person. That’s the best feeling every single time. I hope they’re as excited as I am.

Make sure to go check out @itsdamienstyles on Instagram to be the first to see what’s coming next. Check us out @engmtcent for more content and articles every Tuesday & Saturday! 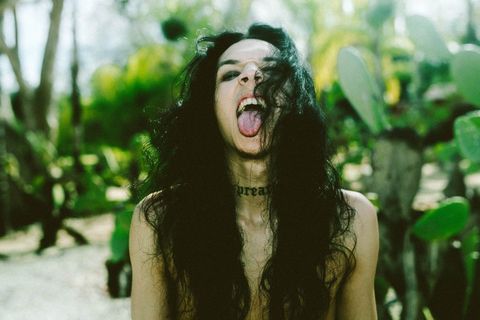