Diving into the artistry of BIGBABYGUCCI's latest 7-piece debut.

Charlotte’s BIGBABYGUCCI is on his way to the mainstream with his latest project entitled Assume the Worst. Every track belongs on your playlist with zero skips from start to finish, and so much diversity throughout the project as a whole. Assume the Worst is a seven track piece of work that starts and ends with bonafide hits. BIGBABYGUCCI rocked out himself on this one and shattered any and all expectations, clearly taking his time with the process in creating this one.

After two albums in 2020, it’s clear BIGBABYGUCCI’s found his pocket of sound. Establishing his sound and learning how to play with it in order to avoid repetitiveness between tracks in 2020, and after almost five years of working and releasing music professionally, it’s without a doubt time for his take off. The Charlotte native dives into his lifestyle, girls, drugs, as well as work throughout the project, all from different perspectives within his story.

The album begins with Language, where BIGBABYGUCCI goes in over a choppy beat by the producer fish who makes several other appearances throughout. BIGBABYGUCCI explains how he think “he’s losing his mind but he don’t care cuz he’s getting rich as hell,” going on to say “she said she loving me but that’s funny cause BIGBABYGUCCI don’t love himself.”

The last track Bleed Thru has him asking a girl “if she’s really really bout it?” Explaining how he just “flew her to LA but he’s so high he don’t need to pilot.” Rapping how “he don’t need nobody… don’t trust no one so instead of dapping you up he’ll do so with his nine.” BIGBABYGUCCI will leave you shocked, with nothing but beat buildup for the first 30 seconds, and what’s done to the rest is nothing short of unexpected. 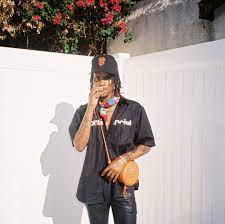